The demo is a conceptual demo, made with Unity, designed to show how a kitchen can be visualized and configured in mixed reality. The interior design mixed reality demo builds on technology that has been used to visualize cars in Varjo projects, such as those done with Aston Martin and Volvo.

With this kind of application, users can choose parts and design their kitchens before construction has begun, comparing how different materials go together in a photorealistic experience that very closely replicates what the finished kitchen will be like.

Cooking up an XR demo experience 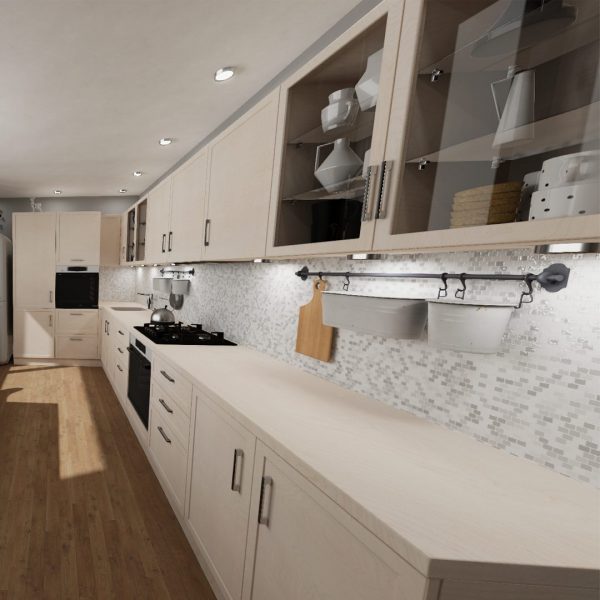 In the demo, the user begins by aligning a floor plan to a clear space in a real environment, using the pass-through camera feed of a Varjo XR-3 mixed reality headset. (The demo can also be run in VR-only headsets including the Varjo Aero and VR-3, but the kitchen will then be rendered within a fully virtual environment.)

After the floor plan is aligned in a suitable space, the player can summon the virtual kitchen to appear around them. The user can then easily change colors and materials used for the floor, cabinets, handles, and worktop.

For this demo, we have created two types of animated transition effects for unveiling and hiding the virtual walls and contents of the kitchen. Having transitions gives the user a more enjoyable experience of the demo instead of just making items snap instantly into place.

The first effect is a gradually evolving, animated dissolve effect.  It is done with the Unity shader graph. The dissolve effect has some somewhat magical visual properties since it really looks like the kitchen is appearing from thin air in front of the user.

The second transition, for the surrounding room, is an animated scale effect, with a cartoon-like animation curve that gives the impression that items are popping up all around like mushrooms.

One of the really striking features in this demo is the functioning virtual window in the kitchen. The player can see the real world through the window, just as if the kitchen was an actual set in the room. 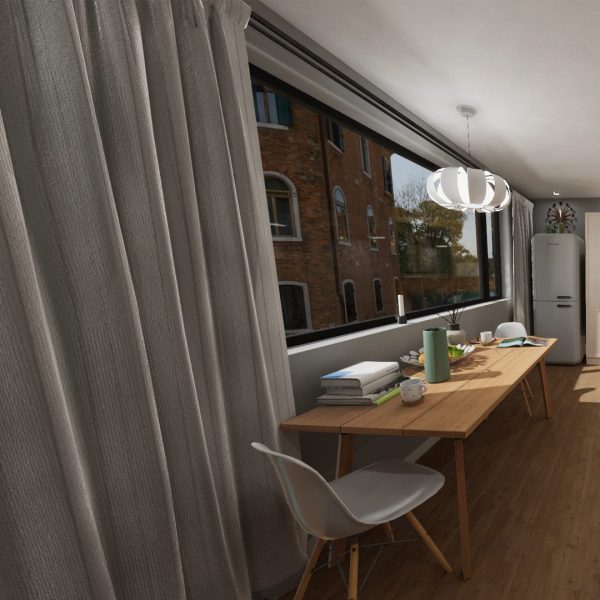 The demo, although currently generic, could be repurposed for further use, using any branded kitchen designs and machines.

The demo is created with Unity 2020 with HDRP pipeline. It uses Ultraleap hand tracking for the player hand UI. The demo is compatible with Varjo XR-3, VR-3, and Aero devices.

The Varjo VR-3 headset retains hand tracking controllability, but it does not offer XR capabilities, so the player is surrounded by 360 images instead of a real-world video feed. The Varjo Aero headset works much in the same way but is controllable with SteamVR compatible controllers rather than hand tracking.

How to get a taste?

This conceptual interior design mixed reality demo will soon be available to all Varjo users and can be tested in advance by getting in touch with our team.