Rémi Arnaud, Principal Architect, has been working at Varjo since early 2019 and is a keen attendee of the AWE (Augmented World Expo). Below are his personal thoughts on AWE 2022.

How is it possible a year passed so fast? It seems it has only been a few months since AWE 2021, and now AWE 2022 has already been and gone. Indeed, this was an eerie feeling because the last AWE was only 6 months ago. It had been delayed because of Covid, and back to its regular place in the calendar this year. Still, this was bigger and better than in previous years, and this is a good thing for the XR community.

The theme of this edition is that XR can make everything possible, including maybe solving the climate change issue via a $100,000 XR Prize. But truly the AWE 2022 overall sentiment is that all the different technologies that have been introduced over the many prior AWE conferences are now coming together into real products, and in turn, enable content creators to express themselves by relying on solid software and hardware, instead of being limited by immature unstable technology. The AWE crowd has always been appreciative of such efforts and looking past the technology limitations, but this time it really felt that XR is now able to make dreams a reality.

During his keynote, Ori Inbar was demonstrating how existing XR applications can help materialize dreams inside a head-mounted display. Whether it be petting a dog, playing Super Mario in the park outside, travelling in time, witnessing monsters attacking buildings, driving on the surface of Mars, or even meeting with a deceased daughter. IMHO this marks a significant milestone when the hardware and the tools are commercially available, and their quality and stability enable content creators to finally express themselves. The hard part for the XR vendors was to integrate all the different pieces of software and hardware into an easy-to-use and stable product. There are many examples of this that could be tried at AWE 2022.

I am particularly proud of Varjo accomplishment to have won the Auggie award for the Best Headworn Device, which is no small feat. Aero represents the milestone where devices are finally at the level necessary for great content to be created and experienced.

And let’s also mention OpenBCI Galea which won the Best Interaction Product. This product is the perfect example of the technology integration mentioned above, it integrates EEG, EMG, EDA, PPG, and eye-tracking into a single headset. Also, it is worth mentioning it is using Aero for the display and eye-tracking part, associating Aero with another AWE 2022 Auggie award. 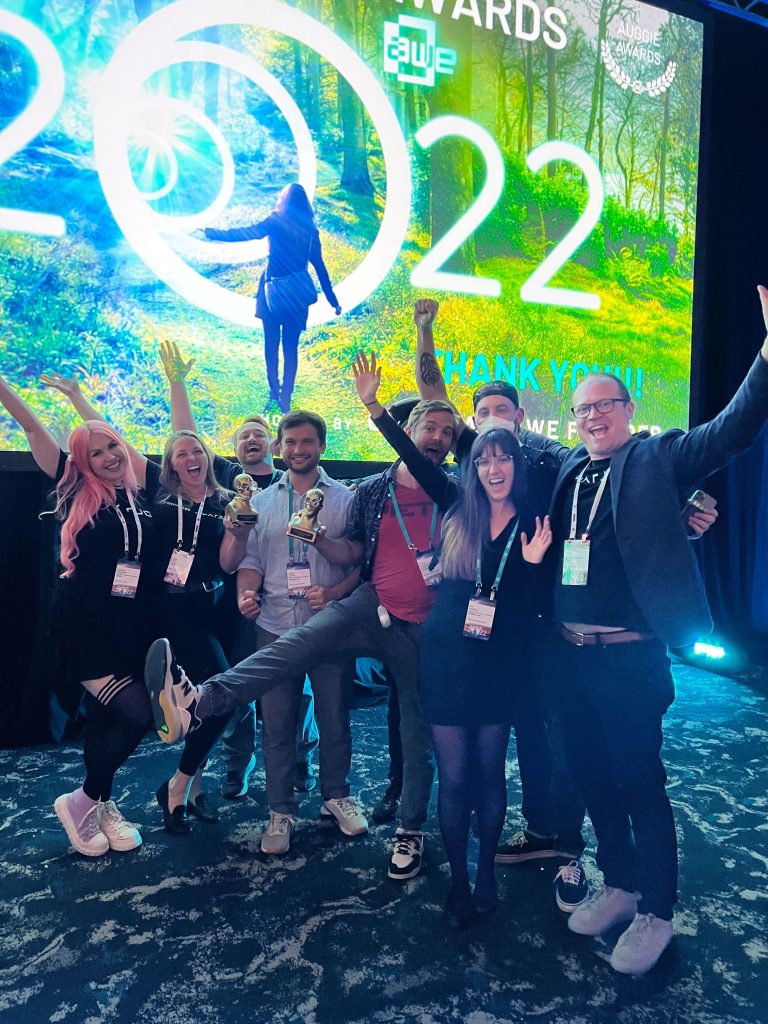 Maturing also is how the privacy, safety and ethics issues are being handled by the community that decided to take the matter in its own hands with several associations, such as the XR Guild. They are inviting individuals and companies to adhere to their chart of principles. This is very encouraging, as there is no Freedom without Privacy. This is well-aligned with Varjo values and software practices.

AWE and the m-word

Ori was proud to not have used the M-word once in his keynote, but following him on the main stage, John Riccitiello, Unity CEO, did quite the opposite by providing us with his own definition of the Metaverse, which is the next generation of the internet, always real-time, mostly 3D, mostly interactive, mostly social, mostly persistent. During his presentation he talked about Metaverse destinations, which according to him by 2030 will be as popular as web pages are today. I admit that I really liked John’s definition to state that the Metaverse destinations will always be real-time, as in the next image will be seen for the first time. Of course, game engines, such as Unity, are the technology needed to create such real-time images.

Software tools have also made a lot of progress, enabling content creators. One of them was voted both Best Creator & Authoring Tool as well as Best Developer tool: ZapWorks, and thus won two Auggies awards! This tool is used for creating WebAR content, which I understand is mostly used for creating mobile phone applications running inside the phone web browser (so there is no application to install, allowing for impromptu AR experiences). All other software vendors had good improvements, such as Unity providing repeatable AR testing tools for developers, and Niantic Lightship providing developers tools to build outdoor applications. The most impressive technology announced by Niantic is the VPS – Visual Positioning System – that determine a user’s position and orientation with centimetre-level accuracy — in seconds.

Overall, AWE 2022 was a noticeable milestone of progress, even though there is still a lot of work ahead, especially regarding the interoperability of the various systems. Unfortunately, the performance of current entry-level consumer HMDs is still limiting the kind of dreams that can be made a reality. Consumers still need to wait a while before they can enjoy having legs attached to their avatars in a wireless HMD